This is a solution guide to the Narnia3 Level at overthewire. This write-up was created on 12 October 2015.

Challenge Description: Narnia3 requires the attacker to take advantage of a strcpy() vulnerability which does not have any bounds checking. Since the strcpy() is executed blindly it creates a situation where the user can overwrite the buffer affecting all the variables in main.

First connect to the lab

Change directories to the narnia games folder: cd /narnia. Next, let’s examine how we get the password for the next level: less narnia3.c

This is an interesting problem because the program accepts a command line argument and then does a strcpy() of argv[1] on line 14. When we check the man pages for strcpy() we find, “The strcpy() function copies the string pointed to by src, including the terminating null byte (‘\0’), to the buffer pointed to by dest.” We also find at the end of the man page a specific bug (shortcut is shift+gg):

Great so now we know we have another buffer overflow, and you can find more information about buffer overflows at exploit-db. So knowing this information we now know that strcpy() will take everything it finds in argv[1] until it reaches a null character, but the buffer for ifile is only 32 bytes. If our argv[1] were longer than 32 bytes it would overflow into something, but now the question is:

First, lets make some files. Since we know that the buffer needs to be overrun by 32 bytes we need to name a file something that is larger than 32 bytes. After the file is created we can test our theory with:

This creates a directory in the tmp folder 1 called aaaaaaaaaaaaaaaaaaaaaaaaaaa. The screenshot tells us that we are either overunning the ifile or the ofile, because it notified us of an error that it couldn’t open “/abc”, but did not provide us the entire directory we tried to open. Let’s examine which we are overrunning with objdump -d -M intel /narnia/narnia3

First, I’m going to build a visual image of what the stack looks like.2 Our variables are declared in this order ifd, ofd, ofile[16], ifile[32], and buf[32]. Beginning at 0x8048523 the stack expands by 112 bytes. Which means the bytes are reserved as follows: bottom 4 bytes3 are ifd, followed by 4 bytes ofd, 16 bytes for ofile, 32 bytes for ifile, and 32 bytes for buff. This is a total of 88 bytes - the remainder of the bytes are used for local variables.


Confirm the view of the stack by observing it at a designated breakpoint - 0x80485464. It doesn’t look like text, but that is because we are viewing all hexidecimal values. We can type a simple command in order to see the known string in the stack as shown: x/s $esp+88 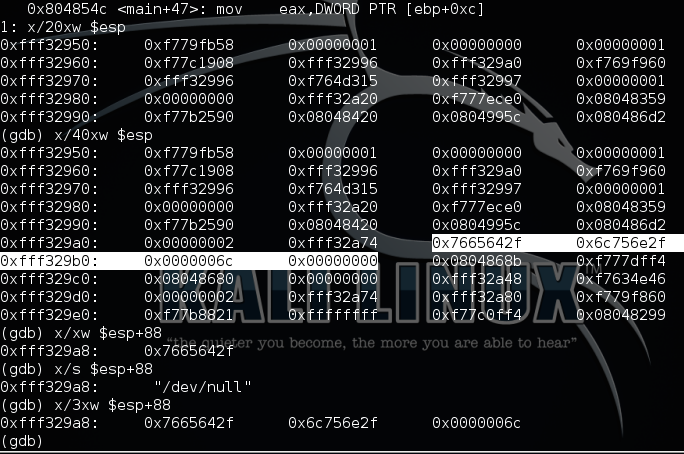 Beginning at 0x8048526 the character string /dev/null for ofile is placed onto the top of the stack at esp+58. The next interesting point is around 0x8048579 where a strcpy operation takes arg[1] and copies it into ifile. If we reference our stack table now we can see what is happened to our input earlier, because the “abc” overflowed into the ofile! 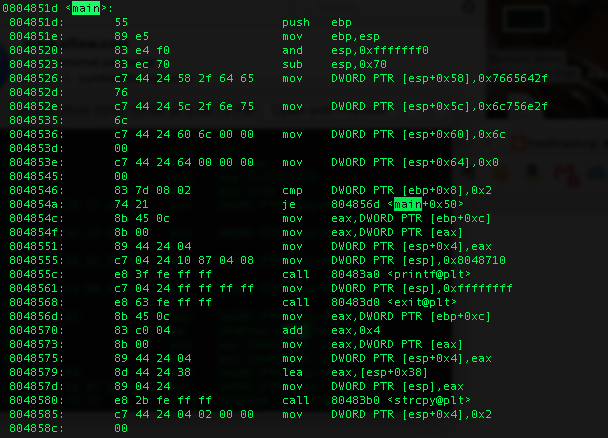 Now it’s time to craft our input to take advantage of this vulnerability. The general idea is that we are going to use two file names with the same name to pass as arguments to ifile and ofile. We will take advantage of the write function which was previously writing to /dev/null and make it write something else instead. Which if we create a symbollically linked file as our input we can read the key.